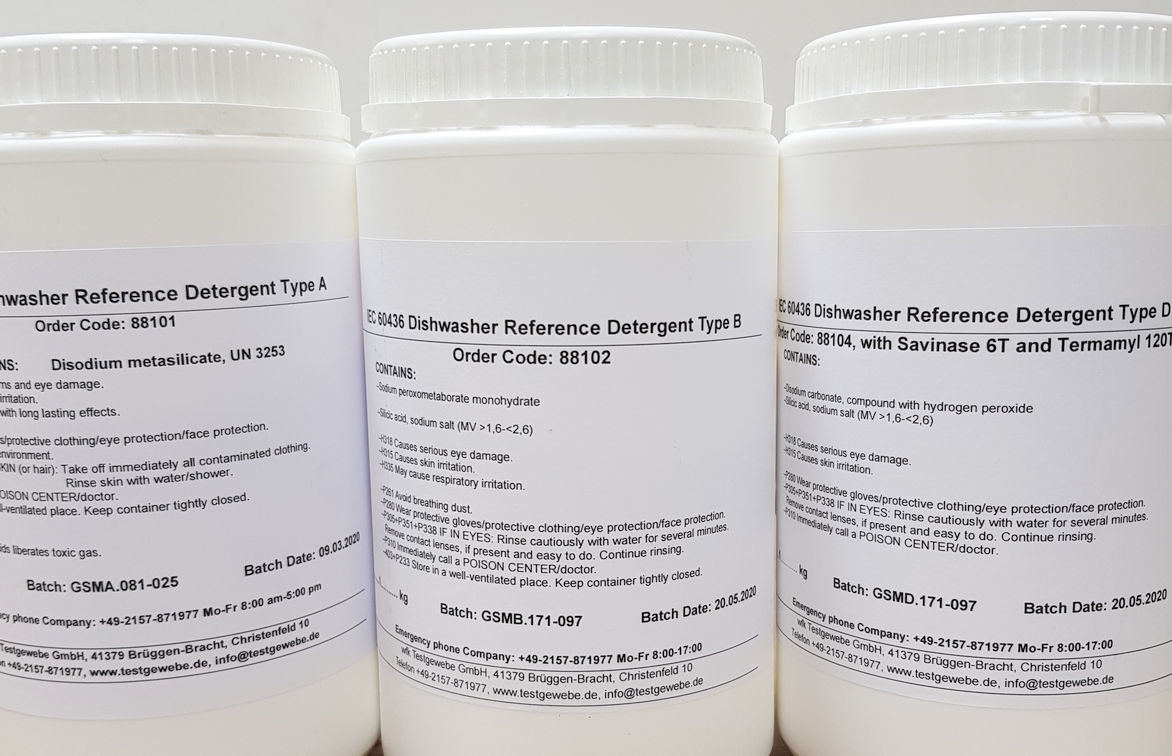 Standard Detergent Type A* (HD, phosphate free, low suds)
With the test method IEC 60456 being an International Standard, this detergent is the most commonly used standard detergent for appliance testing worldwide. It is also being used in numerous other test protocols beyond appliance testing. The current (5th) edition of IEC 60456 continues to use this detergent, now also being verified to be fit for use in all known washer platforms and for different water hardnesses.

Cenelec typically does not specify own detergents. The Cenelec standards as well as the related national European standards instead refer to IEC standards. Minor exception: The IEC-P Standard Powder detergent 2016 has been first published in EN 50640:2019 but was developed by IEC SC 59D for implementation in IEC standards that are expected to be published later than EN 50640.

The IEC Standard Powder Detergent 2016 is an update of IEC-A*, the most commonly used standard detergent for appliance testing worldwide. The BASE powder is identical. The difference is that in the fully formulated detergent the Sodium Perborate was substituted by Sodium Percarbonate.

It is specified to be distributed and stored in 3 separate parts:

This detergent is no longer specified in the latest version of the standard (IEC 60456). It is used and referred to by other standards (e.g. AS/NZS 2040.1:2005) and test protocols. It is specified to be distributed and stored in 2 separate parts:

The 2005 edition of AS/NZS 2040.1 specifies two standard detergents:
One of them is not available from us the other is the „Detergent for drum type machines“.

This detergent specification uses IEC-B BASE plus some low dosed bleach:

This detergent specification is based on IEC-A* BASE plus some very low bleach content.
As an alternative to the fully formulated powder, also IEC-A* BASE may be used with the addition of 1,5% Sodium Perborate-Tetrahydrate:

Working groups under IEC technical committee SC 59D are working on a revision of the wool wash testing to also include wash performance (besides the currently specified wool shrinkage test). The new procedure is planned to include a formulation for a dedicated standard wool detergent, because the formulation of the IEC-A* detergent (which is currently used for the shrinkage test) differs significantly from market wool detergents.

The respective IEC working groups already developed and tested a draft formulation of a liquid wool detergent. It is planned to introduce the new formulation with edition 6 of the standard. The tests showed an adequate performance of the draft detergent as compared to market detergents, the current draft formulation was therefore agreed to be used for further development of the new test method.

The detergent according to the latest draft formulation is available on request from wfk:

„Textiles — Tests for colour fastness — Part C06: Colour fastness to domestic and commercial laundering“
Part C06 of ISO 105 specifies „methods intended for determining the resistance of the colour of textiles of all kinds and in all forms to domestic or commercial laundering procedures used for normal household articles using a reference detergent.“

The formulation of that detergent is based on that of IEC-B BASE, the difference being that ECE-1 does not contain optical brightener.

The standard specifies the following detergent:

The formulation of that detergent is based on that of IEC-A BASE, the difference being that ECE-2 does not contain optical brightener nor protease.

The standard specifies the following detergent:

Textiles — Industrial washing and finishing
procedures for testing of workwear

The standard specifies the following detergents:

The AATCC have used standard reference detergents in various textile test methods since the 1960s. AATCC Standard Reference Detergent 124 and AATCC Standard Reference Detergent WOB (without optical brightener) were the first formulations adopted by the AATCC to represent typical US home laundry products of that era. Since then, the AATCC have adopted new, additional standard detergents to respond to changes in market formulations. The following products are still commercially available (we may order them for you on request):

If you need other AATCC detergents, please contact us. We’ll try to provide them for you.

This detergent is no longer specified in the latest version of the standard. The main (or rather: only) field of application now remains in material testing according to EN 12875 „Mechanical dishwashing resistance of utensils“.

The detergent according to the latest formulation (corrected formula) is available from wfk: